Back about 10 years ago I bought my very first server Compaq DL380 3u – I plugged it in, in my bedroom which was in fact a small room at the back of  shared house with no air conditioning – the first time i pushed the button and the jet engines started whining I was hooked – the noise was enjoyable, I don’t think I’ve ever heard anyone else say it, but yeah…

After playing with this for a year or so and teaching myself all about computers/servers and the likes I moved again – this time into a small townhouse, I moved over to a junky AMD white box filled with huge 500GB HDD’s. I was able to cool this fairly easily with the window mounted air conditioner and it lived a long and solid life until its replacement about 6 years ago.

This is where I went back to HP’s – Got my hands on some good eBay deals and found myself the proud new owner of a DL380 g4 and DL360 g4, I racked them in my newly acquired Sun micro rack and they lived for a good year and cost me more than I care to discuss in electricity and cooling costs, Something had to change! To the bin they went…

Another house, another Idea, I found myself purchasing a few Supermicro servers off ebay and some lads on ServeTheHome got them home and racked into my 26u ‘slightly too shallow for servers’  rack (I’ll find a pic of this eventually)

Due to being located in a old converted single brick shed that had been transformed into a bedroom I found that again I was unable to play with my homelab/mini data centre as much as I liked, so it was just powered up when I wanted to try something specific, also held off populating the San due to the fact I’d never use it, didn’t see the point of spending the cash then, glad I didn’t!

Anyway, now we arrive at today.  Signed up to build my first home late last year and included a store room and odd sized bedroom to turn into my own proper server room and office/work space! 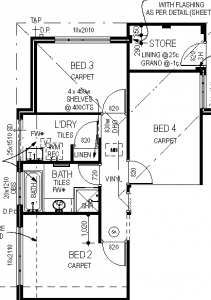 Pics of said server room (yet to be setup, only moved in a week and a half ago!) –  need aircon, proper ventilation and hot Isle installed before I go any further. (I’ll upload plans for this later too). 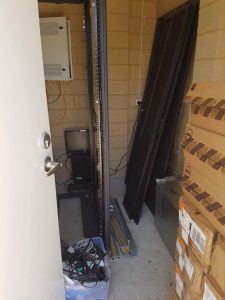 So that’s the server room for now.