A week or so ago after reading over the vSan best practices Guide, I decided it would be best to look out for more new Servers. Afterall, is there any point having a vSan cluster if you can’t recover from a  host failure?
No, I didn’t think so either! Or at least that’s how I convinced myself I needed another server.

After looking over Ebay and realising that most enterprise grade hardware is still rediculously expensive in Australia I’d almost given up for now. Maybe I didn’t need more new servers… 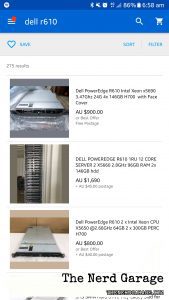 Then I got an email reminding me of something I’d completely forgotten about! A local ex government auction and the main items where Dell R610’s in the masses!

Having realised that there was one R610 available that has obviously come from the same organisation that my other 3 vSan hosts came from I set about buying that.

Over the course of the day, after selling a bit of crypto currency that randomly sky-rocketed…  I realised I could buy another 2 servers if I could snag them cheap enough.

So, I made another two bids! On the wrong two servers! Are you kidding me?! What the f*ck! This is a tip to everyone, if you’re looking at auctions…  Make sure you don’t have 20+ tabs that are the same product.

Little did I realise at the start that 3/4 of the auction photos were of the same sever… That’s what snagged me I reckon.

Anyway, thinking I’d have a crazy moment I also bid on the two other servers I originally wanted to… Then 3 more for good measure! And yeah.. I won. 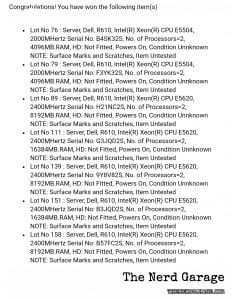 Unfortunately (I guess?) I didn’t win the R610 I had originally attempted to win. Well I did, but I didn’t match the sellers rediculous reserve..

Very early morning start to go collect my new toys, not going to go into prices here. However, these 7 cost a few bucks more than then 4 I got recently for what was already a great price based on my many hours of research.

So, I get the home and head off to work!

It was hard to leave this without playing with them, so very hard! 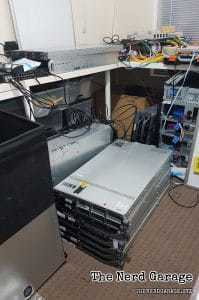