The Quanta LB4M is a bloody bargain for what it is! However, there were a few times I almost wasted my investment and threw it through the window. It just wouldn’t do what I was trying to do!

Update: new post about the networking setup can be found here: HomeLab: Fixing issue with the proposed network configuration. 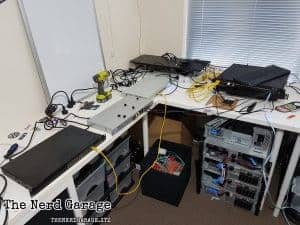 Yes, I did choose to stupidly overcomplicate this setup – However the issues I’ve been faced haven’t been due to any part of the complexity that could be removed.

The vyOS to pfSense link worked without a hitch. As did the vyOS to DMZ switch. However I continued to struggle with the LB4M to pfSense LAG.

I’ll admit, I went into this with no freakin idea of exactly what I was doing… However I’m sure I got it right quite a few times!

Yet, Nothing I seemed to do would correctly bring up the interfaces. At times I could get an IP from the DHCP server on the correct VLAN interface presented by  pfSense; but I couldn’t send traffic!

This was with specific allow all firewall rules for testing purposes. I’d even disabled the packet filtering completely many times – to no avail.

Are you freakin serious!?

The fact DHCP on the correct VLAN worked all the damn time make me curse non-stop at the LB4M as I was sure it was that! I mean, DHCP worked so some traffic was flowing… Right?

As I proceed to intentionally turning off STP on the LAG interface, pfSense becomes unresponsive… Managed to Kernel panic which in its self is a little worrying; but I might (or highly might not) look at that another day… Of if it panics again.

Switching back on STP and removing the 4 LAG ports, I restart pfSense; plug the ports back in… A few seconds later my Mac Pro shows Google’s homepage…

So what’s the lesson here…

pfSense is a troll.

If I’d restarted pfSense even once I’d probably have finished this part of the build days ago… Damn.

Unfortunately, whilst I was turning off all the hardware over night to not waste power… I inevitably would break the LB4M config just enough, then give up. That the following boot wouldn’t just make things work.

During that time I tried every possible firmware I could find. Including the routing FW; which I got to ‘work’ rather quickly.  However nothing I seemed to try would get the VLAN interfaces to a speed greater than 10 half.

Tonight I’ll be finishing the LB4M setup including LAG to the UniFi 16xg then adding and testing remaining VLANs… Good luck Brendan!