Today was dedicated to Networking – PT 1.
As it was too damn hot here today I decided to let the Server Room build sit for a little bit longer (heck, what’s another week).  I thought I’d tackle something I was a little worried about; Within the comfort of my office.

As all the different functions of these hosts were going to be run on different VLAN’s and I’d had a few issues with this damn LB4M in the past, I was concerned… But this was unwarranted, which I was soon to discover.

To begin, I needed to unwrap a metric shit ton of new patch leads and with the help of my little future nerd, we got it done in record** time. 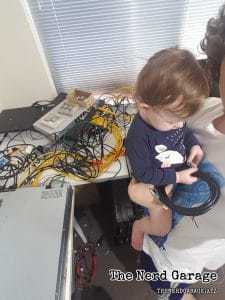 **Unwrapping cables and undoing wire ties whilst holding a 1 year old is definitely interesting…  But it was the fact she wanted to do a pre-inspection of all new cables that slowed us down a bit.

Well, after the big boss did her inspections everything was patched up and I was ready to go! 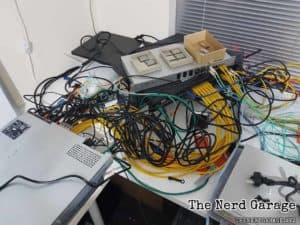 All plugged in, it was time to  Jump into the LB4M and configure the Vlan’s. *typing rapidly* this should be okay now… Nope, wasn’t working… *fu*cking LB4M!*…

After analysing the running-config a few times and one coffee later, I’d realised the LB4M wasn’t at fault…

I’d simply messed up by;

1) not configuring the trunk to participate in the new Vlan.

With my own stupidity out of the way (at least for this part of the job) I moved onto setting up the vCenter and adding the hosts.

Didn’t take long until that was sorted and I still had some time before bed,  so I figured I’d take a moment to get another thing off the list.

Installed as expected, but initial configuration against an external Platform Services Controller seems to fail.

Quick google-fu gave nothing relevant, as I’m running the latest version that should work without issue, so I went to bed.

That’s a job for another day!

With so much more to do there will be many more blog posts to come.