Finally, after a few months of working most weekends the Server Room Build is complete!

Let’s add some expression to the “build” part, as you’ll notice… There is still a gaping hole where the rack should be. 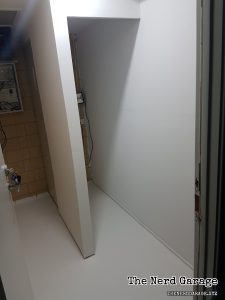 Whilst the building side is, there’s still quite a lot to do before I get into racking and having a functioning Server Room unfortunately.

Whilst there is technically sufficient power within the room to get the rack live, I am not interested in doing things half a$$ed; this means another few weeks/possibly months (more on this soon) until I can become the power companies favourite person in my suburb (obviously excusing those who grow the tea leaves, surely they exist around me…)

Let’s go through some progress pics, then I’ll give a quick run Down on what’s left to do. 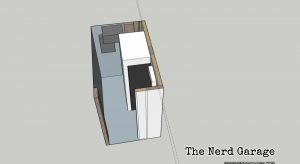 This is the original design I drew up, slightly changed since.

This is the room in the beginning.. 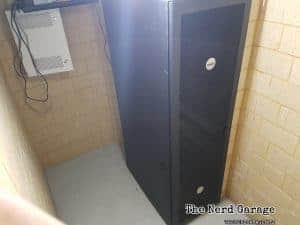 At this point I was pretty happy with the space I had on the front and rear, unfortunately I’d prefer to have a little more space on the rear but… When the room is only so big there isn’t much I can do about that is there…

So with all that decided upon, I set about destroying the roof that was already in the room as I needed to build up to accommodate the air-conditioning unit. 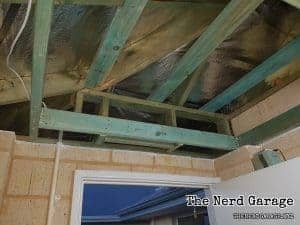 I’ve skipped a few pics of the destroying ceiling and installing all the extra framing process as they’re boring, but this is it nearly ready for plaster board to be installed.

We will get back to the other parts of the ceiling later, on to the fun part!

Being that I live in Australia, for the most part it’s quite warm & ontop of that electricity isn’t the cheapest… With that in mind I wanted to, without reducing my server footprint, try and be as energy conscious as I possibly could.

Obviously using a hot aisle to take all the hot exhaust air out or redirecting to the aircon depending on temperature was the option I went for, this in itself is a massive part of the build which will come later… Sorry!

With everything measured up and all my supplies handy i got to work. 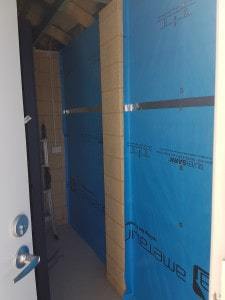 Having an air gap is critical as the unfortunate location of this room is facing the great Australian sunset & the wall is only single brick… But that’s life.

The effects of the sun on this wall are well and truly mitigated by correctly air gapping and sufficiently insulating and installing sarking as you see above.

However within the next few months, I will be building my shed so the wall I’m covering will get no direct sun.. Might have been a lot of work, but all insulation is important to keep hot out and cool in. 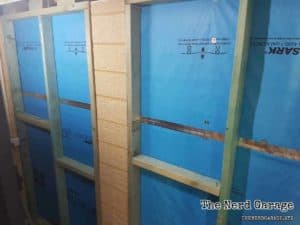 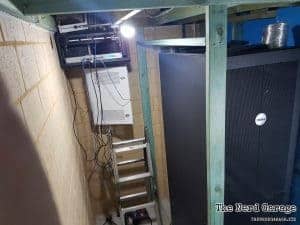 The seemingly random height of the top frame is intentional as you’ll see later on.

And that’s It for hot/cold isle framing, let’s continue to the worst part of all..

Yes, the absolute worst. Fibreglass based insulation and a whole bucket load of it! 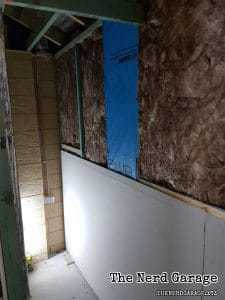 Being summer, there was no chance I was throwing on a full protective suit to make sure that I didn’t get covered in horrible glass. So I did the best I could with a shirt and decent gloves.

As the insulation needed to be held up, the walls were sheeted at the same time, I was glad to be done with insulation… For now. 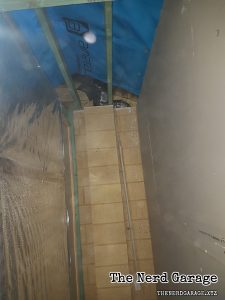 Let’s move onto the next step now, seeing as we’re apparently already there anyway.

But I got there in the end with surprising minimal wastage, or at least that’s what I’m telling everyone. 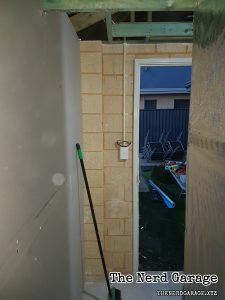 But does it fit?!

Well… It’s no surprise that prior to installing the base section I didn’t measure correctly, I thought I had more than sufficient space at the front to open the rack and to rack stuff… But I never considered if I could get the rack in and out.. Especially once I’ve sheeted the walls..

Obviously you can tell by a picture further up that I could get it out as I did to sheet the walls.. But would it go back in with the walls done? 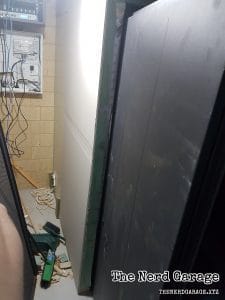 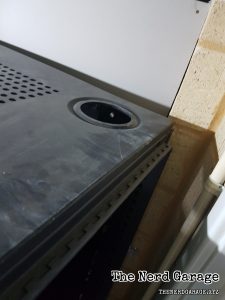 Yep… It will only fit with the door removed… However I still may be faced with an issue when I change the door opening to swing the other side… Only time will tell. For now, it’s okay though. 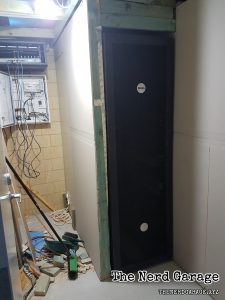 She’s home, for another moment.

With that all sorted, it was time to move onto the ceiling and then finishing the drywall.. 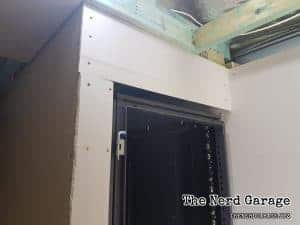 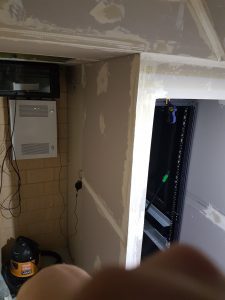 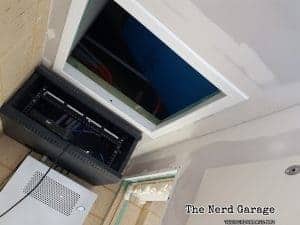 Check out that expanding foam mess!

Finally the messy part Is done with, no more plaster dust, things are looking good at the moment!

– Insert 3 week holiday in Japan… Take me back please! –

The wall paint wasn’t so much the issue, it was this protective coating and the floor coating that I’m displeased about. 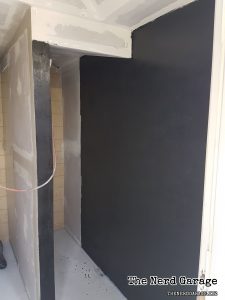 This black coating is floor coating, which contains grit (its anti slip flooring). Based on my tests it will take a nice hit from the corner of any sharp object and barely bat an eyelid… Unlike normal plaster. 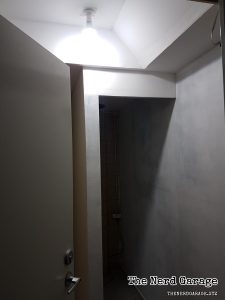 But I didn’t like the look, so I painted over it too, sure hoping it’ll stay strong and the top coats of paint bonded well to the grit!

With the sealee laid down it was time for paint, having spent a massive 30 dollars on paint and sealer combined, I was a little worried about the end result… However, it presents well. 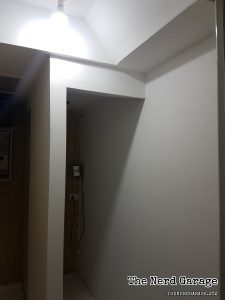 The floor was rather horrible after my multiple messes which I’m sure is visible in a lot of the previous pics… And to want the room to present well, whilst also protecting the hardware (cement dust is a pain in the butt) I purchased some polyurethane floor coating and got to work.

Unfortunately, the only colour options were red or white, so to not take away from the already clear theme I chose white!

And with that done, I need to let the last coat dry completely then it’s time to move onto the other key parts; Like wiring, sensors and aircon. Then I can install the final skirting boards.

Yep, I painted the walls too… Not an issue as they will be covered once the plan for the sub board is ironed out and actioned.

Thanks for reading and I hope you’re as happy as I am that the major part of this build is complete!